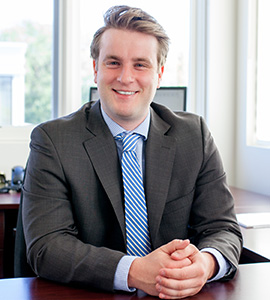 Michael was born and raised in Kelowna, British Columbia. He attended Okanagan College where he obtained a Bachelor of Business Administration degree, graduating with distinction and a major in accounting. Following undergraduate studies, Michael went on to obtain a Law Degree at the University of British Columbia. He was called to the Bar of British Columbia in 2017, and his sole area of practice has been in personal injury litigation.

Michael has appeared in Supreme Court Chambers, pre-trial hearings, and negotiated numerous settlements on behalf of injured victims. Michael is proud to be providing legal services in his hometown and eager to continue developing his personal injury practice.

When not in the office, Michael can likely be found on one of the many golf courses the Okanagan has to offer and is a member at a local course. He has also played hockey throughout his life and continues to play recreationally.